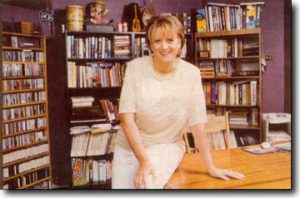 On the air, she’s intelligent, passionate, gutsy, caring and unpredictable. At home, she’s… intelligent, passionate, gutsy, caring and unpredictable. “I’m the same off the air as on,” admits Jane Hawtin, popular host of WTN’s Jane Hawtin Live! There’s no pretension about the charismatic talk show host who has been educating and entertaining Canadians since 1976, when she landed her first on-air radio job in Kingston. She hosted Q107’s public affairs and entertainment show, Barometer, until 1987, when CFRB’s The Jane Hawtin Show, was born and matured to Canada’s highest-rated noon hour talk show.

Jane Hawtin Live! represents the highly successful culmination of eighteen years of radio experience and an entrepreneurial venture as a business partner with Paul Osborn in Electric Entertainment. The live television talk show, now entering its fourth year, moved to a 7:00 p.m. weeknight time slot on the Women’s Television Network in September. The format includes a Friday night entertainment show taped on a new set designed for these popular segments, because, “It’s hard to get entertainers live on Friday nights.” 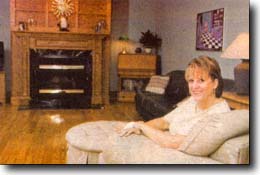 Hawtin is a hot topic these days, gracing the cover of Homemaker’s summer issue and the subject of a feature article in September’s Chatelaine. People are fascinated by her intelligence and infectious laugh, as she brilliantly lays the groundwork for our burning questions, then gives us the opportunity to ask them. She’s interviewed everyone from Anne Murray and Mary Tyler Moore, to Jean Charest and John Crosbie, and tackles topics as diverse as eating disorders and media ethics. When she’s not fielding the unexpected flack and spontaneity associated with “live” TV (“Roger Clemens arrived 15 minutes late for his segment, so we filled in by interviewing his web site designer.”), Hawtin is relaxing in the cosy Toronto home she shares with her husband, Chris Allicock, and their two children, Amber (15) and Skyler (10). Chris is director of promotions and publicity at Electric Entertainment and Jane’s life partner in everything from work to raising the kids and renovating their house.

The two-storey home is so stunning, friends have held weddings there amid garland and romantic twinkle lights. “This is a great party house,” says Jane, who loves to entertain. The home is a comfortable combination of traditional and contemporary spaces filled with rich wood trim, modern art and the antiques Jane has collected since her teens. “I’ve still got the chair I bought for 25 cents when I was 13!” 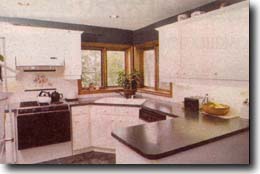 Shades of mauve and purple frame the living/dining room’s rustic oak table, chairs and wall-size china cabinet. Jane and her family spend most of their time in the open concept kitchen/breakfast/family room area at the rear of the home. Kitchen tiles and sofas in green add warmth to this casual space, along with a fabulous family room fireplace with wood surround and mantle. According to Chris, “We took one look at the fireplace, and that did it – we had to have this house!” Sliding doors open on to a backyard patio, complete with hot tub, that presents glimpses of Lake Ontario through verdant trees and shrubs. Every nook and cranny in her home harbours something special – old trunks, pottery, quilts, even whimsical bearded-men sculptures created by a cousin. Whether she’s researching the Internet for a show segment or watching Coronation Street (“I never miss it on Sunday mornings!”), Jane revels in her gracious surroundings. “This is my oasis,” she says. The welcome sanctuary provides a break from the power and energy inherent in her business life. Despite its tremendous success, Jane Hawtin Live! hasn’t yet achieved the mix of political, social, entertainment and health issues Jane envisions. “I’d like more politicians on the show,” says the Queen’s University politics and drama graduate, “but they’re reluctant to open themselves up to callers.” Electric Entertainment continues to enrich its roster with shows such as Linehan, which is seen exclusively on WTN this fall.

Amid the demanding world of TV performing and production, Jane Hawtin enjoys bursts of travel, occasional school field trips with her children, precious time at the cottage and most recently, learning to play golf. For the rest of us, she remains an intelligent oasis in a sea of mediocre talk show media.