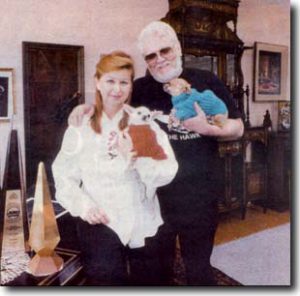 After 48 years in show business, he’s slowing down a bit so he can stop and smell the roses more often – but Ronnie Hawkins is still rockin’ and rollin’ to please the crowds. Long known for his generosity in helping dozens of young music artists get started in the ‘biz, rock and roll superstar Ronnie also lends his celebrity status to help raise funds for numerous charities.

No matter what project or gig he’s involved with, Ronnie always loves to come home – and no wonder, when “home” is Hawkstone Manor on Stoney Lake in Nefton. His sprawling 200-acre estate is a favourite site for weddings, with breathtaking views of the lake from just about every window in the home he shares with his lovely wife, Wanda, and their four Chihuahuas. Pedro Peanut Gonzales is the smallest of the canine group. “He helps fight the women off me,” beams Ronnie. Ronnie and Wanda operate an exclusive Bed & Breakfast in their spacious home, attracting travellers who are looking for comfort and luxury in a unique setting. “Summer offers all sorts of water sports, and in the winter, people can cross country ski and skate here,” says Wanda. “We have 5 miles of walking trails with both flat areas and hills.” There are also cottages on the property available for rent, and Wanda adds, “We’re only 2 hours from downtown Toronto.” 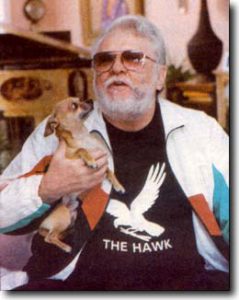 A huge fieldstone fireplace serves as a focal point in the enormous central living/family room at Hawkstone Manor, where the lake view includes pockets of pines, birches and maples. It’s here that visitors delight in the Hawkins’ collection of show business memorabilia. Just inside the entrance sits Oscar Peterson’s piano that Ronnie had hand painted by artist Frank Liscoe.

In addition, this central room houses Ronnie’s Italian-crafted desk adorned with 18-karat gold inlay and topped by his two Juno Awards: the 1981 “Country Male Vocalist of the Year” and the 1996 “Walt Grealis Special Achievement Award” for his outstanding contribution to the music industry. It’s also home to his “Wall of Shame,” where dozens of photos of Ronnie include high profile celebrities such as Kris Kristofferson, Levon Helm, David Foster and even Bill Clinton, an acquaintance from his home state of Arkansas.

After some minor health problems last year, Ronnie has quit smoking and is pursuing a less hectic pace. “We’re trying to un-complicate our lives, so we can travel more,” he says. That process includes selling his collection of over twenty vintage vehicles, and buying himself a 1929 Model A Ford Coupe to restore, just like the one he bought in Arkansas when he was 12 years old. “I sold my Schwinn bike, traded my comic books and marbles and added that to my paper route money. Cost me $75,” says the Hawk.

Still, his performance plate is relatively full. He played during the fall in a Blues Festival on the Mississippi Belle in Arkansas, appeared on “Due South” in November, and performed in Calgary on New Year’s Eve with Kelly Jay of Crowbar. The new year holds more excitement, including a TV appearance with Vicki Gabereau and a trip to New Orleans to play at Levon Helm’s new bar/hotel there called the Classic American Café.

The Hawkins are kept busy, too, with their commitment to helping the Schizophrenia Society raise funds for badly needed research. Their oldest son, Ronnie Jr., has the disease, and Ronnie and Wanda work tirelessly to help others who face the same life challenges. Their generosity extends to other charities; a few months ago, Ronnie hosted “Baystock,” the Battle of the Bands held for stockbrokers at the old Stock Exchange in Toronto, which raised over $100,000 for charity. Recently artist Michael Swanson did a painting of Port Dover, which both he and Ronnie signed. Twenty-five prints of the painting are being sold with proceeds going to charity.

He deserves a little rest; but lucky for us, Ronnie enjoys performing. Things may be different today, but Ronnie Hawkins remains the same outrageous, talented character who left Hawkins Holler, Arkansas to make Canada his home.